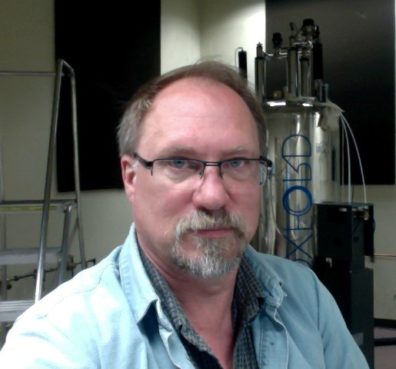 Dr. Gregory Helms, Manager of the WSU Center for Nuclear Magnetic Resonance Spectroscopy recently talked about his career at WSU and the services his Center provides to the University and the scientific community beyond.

Helms: Nuclear magnetic resonance spectroscopy is an analytical technique that is used by researchers in chemistry, physics, engineering, biology, material science and food science, to name just a few research fields, to probe the molecular properties of samples. NMR is extremely useful in that you can determine a sample’s complete molecular structure, including the three-dimensional nature of the molecule in liquid, solid, and gaseous states or states intermediate between solid and liquid.

In addition to molecular structure, NMR is used to:

NMR requires a very large magnetic field for most applications, so in the NMR Center we have magnets that have fields that are on the order of 280,000 times the earth’s background magnetic field. Even though nuclear is used in the name, NMR comes from a property of the nucleus of atoms and is not radioactive. Because of fear of the word “nuclear,” early adoption into the medical field of nuclear magnetic resonance imaging prompted doctors and radiologists to drop the word nuclear and call it Magnetic Resonance Imaging (MRI).

Q: What is the mission of the Center for NMR Spectroscopy?

Helms: The mission of the Center for NMR Spectroscopy is to provide state-of-the-art NMR capabilities to researchers at WSU and the surrounding area. This includes equipment and expertise in areas of liquid-state NMR, solid-state NMR and High-Resolution Magic Angle Spinning techniques.

Q: Who does the Center serve?

Helms: The Center serves over 100 students, post-docs, and faculty from a wide number of departments, schools, and colleges throughout the WSU system, as well as researchers from surrounding schools and companies. We have five NMR spectrometers ranging in frequency from 300 MHz to 600 MHz, which indicates their proton frequency with a bigger number meaning a higher magnetic field and higher overall sensitivity. Using these tools, we can obtain data in the liquid-state, solid-state, and on heterogeneous samples such as cells, which is a useful tool for many types of research.

Q: What services does the Center provide?

Helms: The NMR Center is staffed by two doctorate-level scientists, including myself, that have a collective experience of over 55 years in the field. We train most of the students and post-docs to obtain their own data and to operate the instruments. We also provide data acquisition and data analysis for those researchers that do not want to be trained or have specialty projects that would require exceptional amounts of training.

With such limited manpower, we can only handle a few such projects at a time but we have worked with faculty, students, and post-docs on a very wide range of projects such as nuclear waste recycling, pasta noodle imaging, cancer drug structure, and biofuel production from algae. In the past, we also taught courses. But due to limited time and resources, we now focus on direct training on the instruments.

Q: How does the Center’s work impact the state and beyond?

Helms: Our work at the Center supports a wide variety of research projects. We provide a unique service and its impact on the world is predicated on how our customers use it. Almost all work that entails understanding the molecular level details of a sample or system will use NMR at some point. Millions of dollars in grant funding and the success of dozens of projects and students depend on the Center.

Q: What does your role as the Center manager entail?

Helms: My goal is to ensure the continuing operation of the Center for all of the users.

I wear many hats. First, I ensure that the magnets remain magnets. Since the magnets can only operate if they are kept at near absolute zero temperature (4.2 degrees Kelvin), they require liquid helium refills four times a year and liquid nitrogen refills on a weekly basis. This requires considerable skill in the handling of cryogenic liquids, as any mistakes can lead to a catastrophic loss of magnet field known as a quench. Since the magnets can cost between $100,000 and $1,000,000, this is a task that is done very carefully.

After ensuring that the magnets remain at field, I am responsible for the proper operation of all of the equipment that makes up the NMR spectrometer (e.g. radio frequency generation, amplifiers, probe antennas, etc.). This involves regular calibration and monitoring, as well as diagnosis and repair of the equipment. I perform all of the maintenance, which has proven to save more than $1,000,000 for the University.

The NMR spectrometers are connected to a network of about 20 Linux computers. I am responsible for all administration of hardware, software, and all user accounts. We do a lot of sophisticated analysis and modeling, which requires me to be proficient in a large number of software programs as well as Linux/Unix system administration. Together with my associate Dr. Bill Hiscox, we train users to operate the instruments and be able to collect data relevant to their project. In order to do this, we have to be able to understand their project, be able to help design the experiments that they need, and help with the analysis of the data.

Additionally, Dr. Hiscox and I write grants. The NMR Center has had a number of its own grants to provide training workshops for the National Science Foundation. Both Dr. Hiscox and I maintain our own independent research projects and interests as well, mainly in the areas of biofuel research, plant metabolomics and understanding cancer cell growth.

Lastly, I review papers for several scientific journals, as well as attend and present original research at conferences. One of my responsibilities is to publish research. The NMR Center has been very successful in publishing in a large variety of scientific areas and journals.

Q: What is your research background? How did you end up at the Center?

Helms: My background is in chemistry with an emphasis on NMR, NMR method, and instrument development. I have a bachelor’s of science degree in biochemistry from San Francisco State University where I first became instructed in NMR doing undergraduate research in molecular structure determination. I attended graduate school at the University of Hawaii and obtained a doctorate degree in chemistry, studying the chemistry of blue-green algae mainly by NMR.

During these studies, I developed new NMR hardware and applications to study molecules that I enriched in carbon-13 and nitrogen-15 via the culturing of algae in the lab. I developed numerous new NMR methods to probe these systems and was at the forefront of what is now structural biology via NMR. I continued my studies at the University of Alberta in Canada where I did a post-doctorate in NMR method development.

After I finished school, I moved to New Jersey to work for Merck Research Laboratories, where I determined molecular structures of drug candidate molecules for the pharmaceutical giant. While there, I garnered a number of patents, publications and awards.

In 1995, I accepted the job with WSU’s NMR Center and have been here for the past 23 years.