The most common two questions you’ll hear at the start of a new I-Corps cohort are:

(1) How do I find people to interview?

Because the Customer Discovery process is new to most people who taken up the challenge of I-Corps, these questions are at the crux of everything we’re asking Teams to do. Try as the Teaching Team might, most of our advice boils down to “just try stuf, and eventually you’ll find a way that works for you.” We try to be more helpful than that, but if we’re honest that’s the advice from the “experts.” Steve Pittard is a research faculty at Emery University, and he recently led an I-Corps Team through the national program (which we often recommend to Teams that have gone through the WSU Site). As a recount I-Corps participant, he offers the following advice to new and struggling I-Corps Teams. Hopefully his experience can help you make the most of your time in I-Corps.

I just concluded participation in the NSF’s I-Corps program as part of Bay Area Cohort Number 2 which started in mid July and ended on August 29th. It was an exciting non stop 7 weeks with lots of turns and twists. While I’m exhausted I thoroughly enjoyed it and learned a great deal which, after all, was the goal. There were some really talented people at the Cohort and I benefited just from interacting with them. It helped reignite some of my dormant social skills which I now intend to put to good use in developing our technology further. It will more likely be a significant variation of what we originally took to I-Corps but that’s really the point of the program (in my opinion). What you come out with can be totally different in a surprising way.

The approach you employ to get interviews is contingent upon the nature of your technology in that if you have a “B2C” Business to Customer solution then you don’t necessarily need high tech interview candidates – you can simply engage laymen who might have an interest in your technology. For example, in my cohort there was a team with a solution to snoring and they were able to get over 50 interviews in one day just by setting up in a busy area and asking couples if they could spare a few minutes to talk about snoring. END_OF_DOCUMENT_TOKEN_TO_BE_REPLACED

To find out more about WSU I-Corps and find out if our program is right for you, please come to one of our WSU I-Corps Information Sessions:

The information sessions also accessible via AMS for those who RSVP by email.
Our Fall Cohort starts on September 12.
More information about applying on our website is here. 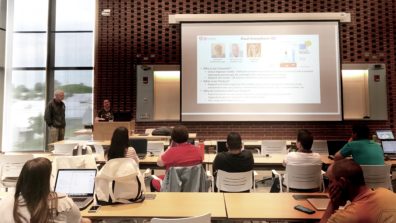 WSU has partnered with the Element 8 Angels to create the Deal Flow and Due Diligence Fellowship. This opportunity is available for WSU undergraduate and graduate students, and post-doctoral researchers who are interested in experience assessing business opportunities with venture partners making investment decisions. Participation is available from any WSU location and will involve a commitment of 5 hours/week.

Compensation is available at $15/hour. 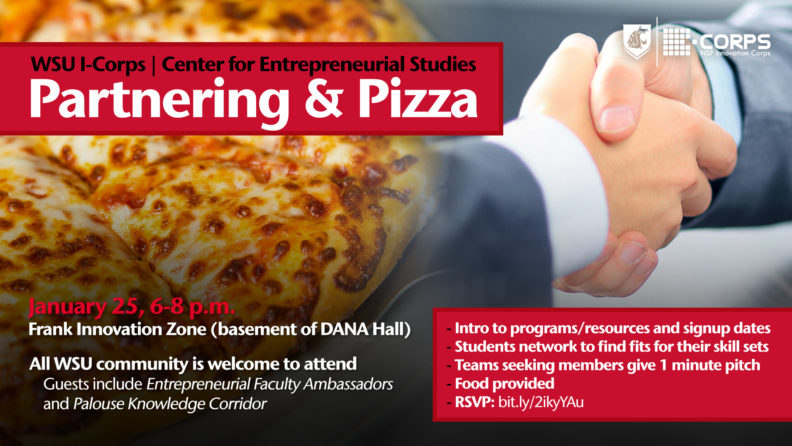 Join your fellow Cougs and the Palouse entreprenurial community for an evening of networking, partnerships, new ideas, and pizza!

The Center for Entreprenurial Studies and WSU I-Corps invite you to join us to hear about new business and technology ideas your Cougar colleagues are pursuing as potential new startup businesses. Hear brief presentations about the resources available at WSU and the Palouse area which can help you create a startup company, find mentorship, or compete for $50,000 in business plan competition prize money!

Representatives from the Palouse Knowledge Corridor and WSU Entreprenurial Faculty Ambassadors will also be attending to provide support and ideas to Teams.

Please RSVP so we can be sure to have enough food for all the attendees.

Learn more about I-Corps at our live information sessions November 17th and 18th!

WSU I-Corps can help you:

WSU I-Corps is a FREE program sponsored by the National Science Foundation. We provide training to WSU faculty, students and staff, and travel funding to meet customers and industry experts.

Click here to see how other Cougs have found success with I-Corps.

November 18th session is accessible via AMS for those who RSVP with their AMS location by email.

These Cougs have been hard at work making their entrepreneurial dreams come true. With a little help from WSU I-Corps, they are now on their way to starting a business based on their research. Could you be next? 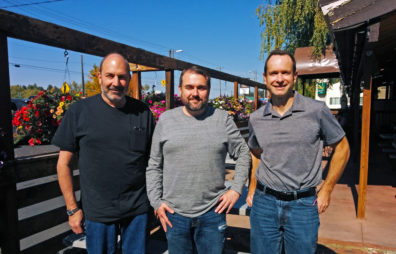 “Being part of I-Corps put us in front of our customers to get valuable feedback about what our prototype device should be – essential information that enabled us to get our SBIR.”

END_OF_DOCUMENT_TOKEN_TO_BE_REPLACED

Being an outsider can give you a perspective that others simply don’t have. You can question the status quo and identify opportunities that insiders just don’t see. This is true whether you are coming to a new industry or a new country.

Clearly immigrants to America see benefits to starting their own companies, and some have found good fortune doing so. In fact, between 1995-2005, 52% of Silicon Valley startups had immigrant founders.

BUT immigrants only make up about 13% of the total population of America. Why the disparity?

END_OF_DOCUMENT_TOKEN_TO_BE_REPLACED

Teams often wonder what they will have to do if chosen as a WSU I-Corps Team, and more importantly:

The short answer is: you will learn a new way of finding how to match innovations from research to real-world customer needs through a process called customer discovery. It will make you a better researcher, a better proposal writer, a better mentor, a better student, and more employable in industry. If this is all you achieve, your participation in I-Corps is a win, a BIG win.

For some Teams, you will find product/market fit at the end of the 8-week program – in this case, you will have discovered a the starting point to developing a viable business and the Teaching Team will support your Team if you want to take the next steps to down the road to starting your own business.

So that’s short answer, which begs the question: What’s the long answer? (And also, what is “Product/Market Fit?”

END_OF_DOCUMENT_TOKEN_TO_BE_REPLACED

As little developed as possible*

Read on to find out why…
END_OF_DOCUMENT_TOKEN_TO_BE_REPLACED

Innovative podcast creation studio Gimlet Media has another entrepreneurship-related podcast hot off the press. It’s called Open for Business. Only the first episode of the series has been published, but it sounds like a great series for those who want to learn valuable lessons by hearing stories about the successes and heartaches of the entrepreneur’s lifestyle.